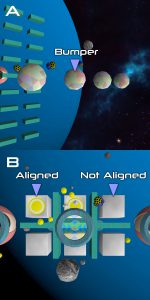 Alignment cubes, emitting inaudible high-frequency tones to scramble White Dove functioning, have been deployed to defend Uranus. Align the cubes to point away from Uranus to begin alignment coupling.

Alignment cubes can be rotated by first picking up a Bumper (by colliding with it), then hitting a face of the cube with the Bumper. The collision will cause the cube to rotate in a direction that depends on which edge of the face you hit. Point all the amplifiers (the yellow circles) away from the planet. There are several alignment cube missions at Uranus. Be sure to always point the amplifiers away from the planet. It is also possible to make a cube out of alignment after it has been aligned, so be careful not to hit cubes that are already aligned.